Brought to Somalia in the 19th century by Arab slave traders, Bantus endured centuries of oppression in the horn of Africa as agricultural laborers. In the beginning of the 20th century, Italian colonizers in Somalia abolished slavery (Besteman, 2016). However, in the years following, Italy proceeded to establish over 100 plantations in the Jubba and Shebelle River Valleys, and introduced labor laws that forced Bantu people to work as farm laborers on plantations exclusively owned by the Italian government (Eno & Leahman, 2003). As a result, many Bantu people were still considered enslaved people well into the 1930s. At this time, though, there was an effort within Bantu communities to become associated in larger Somali clan membership to avoid some of the abuse that shadowed enslaved status in the country (Besteman, 2016). 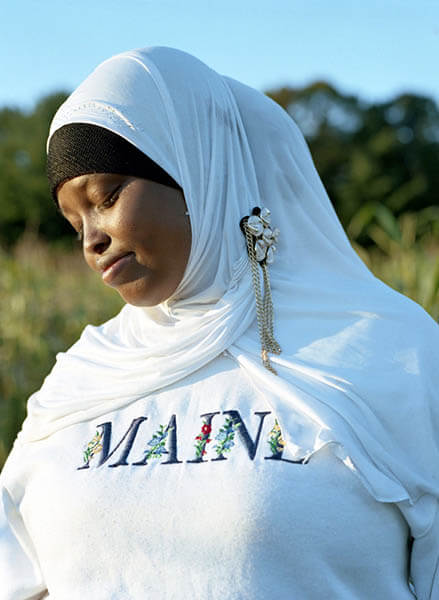 When civil war broke out in Somalia, the Somali Bantus were sent from their homes and farms by armed people of the Somali clan. The legacy and stigma of slavery made the Bantu population particularly vulnerable and many Somali Bantus were killed, tortured, and raped by the ethnic Somalis as the famine increased. The ones who were able to flee walked anywhere from two to four weeks to reach the Kenyan border.

In Somalia, lineage and clan structure provided the basis for social and political life. Bantu families often claimed membership in three of Somalia’s five major clans: Darood, Rahanweyn, and Hawiye clans. Despite clan membership, loyalties between families of different clans certainly outweighed their clan kinship; lineage and clan membership was more impactful for claiming membership within larger Somali society than it was for informing day to day life within Bantu villages (Besteman, 2016).

Further, membership to either jileec (Somali national) or jareer (minority) groups was far more important for determining one’s socio-political standing and thus, quality of life (Besteman, 2016). As agricultural minorities, Bantu people suffered harrowing brutality at the hands of Somali pastoralists in surrounding towns. These Jileec people were often part of the Darood sub- clan, a vein of the majority Cushitic Somali clan, and felt entitled to pillage and assault Bantu people and their property, despite the Bantus attempts to claim clan loyalty that may reflect their own. In fact, many Cushitic pastoralists completely disregarded the Bantus efforts to be aligned with larger Somali clans, noting that their agricultural laborer status far outweighed their efforts to find membership in shared clan alliances. Some cushitics during this time even suggested that Bantu people avoided re-enslavement only because national laws spearheaded by Siad Barre, Somalia’s dictator-president, had outlawed the country’s clan system, which made social hierarchies based on clan membership or previous slave status illegal (Besteman, 2016). 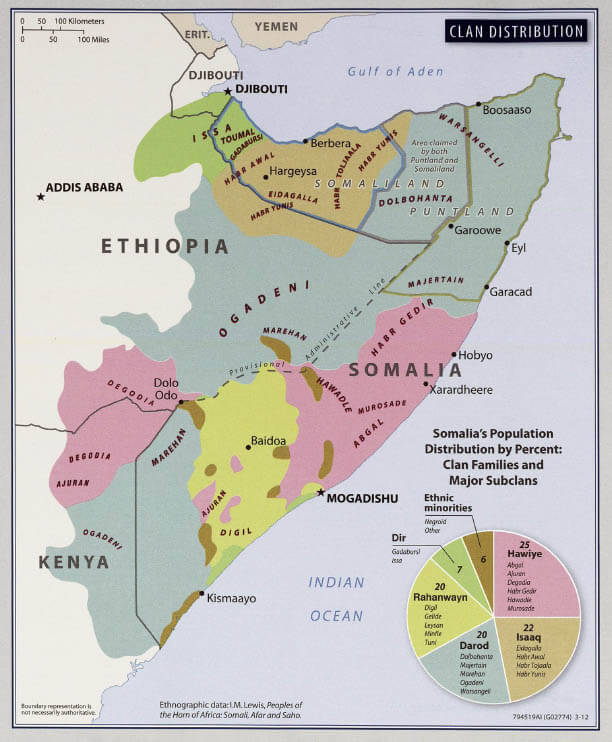 The social hierarchy separating jareer from jileec would become even more meaningful when the effects of the Cold War hit the Jubba and Shebelle Valleys in 1960 (Besteman, 2016). After enduring the Italian administration’s forced labor camps, and British-Italian conflict that passed control of this area back and forth between the two imperialist countries, independence from colonial control in 1960 should have been a relief for Bantu people (Besteman, 2016; Eno & Van Lehman, 2003). However, in the middle of the 20th century, Italian and British powers rewrote a border between Somalia and Ethiopia that ceded a significant piece of Somali-inhabited land to Ethiopia. Somalis were furious about this development (Besteman, 2016).

In part due to the irredentist rhetoric that emerged from this re-organization of the Somali-Ethiopian border, Siad Barre, came to power after a coup in 1969. After initially allying himself with the Soviet Union, Barre turned to the United States for aid and resources once he recognized that the Soviet Union was more interested in aligning itself with Ethiopia, another ally of theirs in the Horn of Africa (Besteman, 2016).

In Somalia, lineage and clan structure provided the basis for social and political life. Bantu families often claimed membership in three of Somalia’s five major clans: Darood, Rahanweyn, and Hawiye clans. Despite clan membership, though, loyalties between families of different clans certainly outweighed their clan kinship; lineage and clan membership was more impactful for claiming membership within larger Somali society than it was for informing day to day life within Bantu villages (Besteman, 2016).

Throughout the subsequent 1980s, the United States, seeing Somalia as a strategically located base between the Indian Ocean and the Persian Gulf, granted the country hundreds of millions of dollars in economic and military support. Barre used these resources to consolidate power in the hands of his closest friends, advisors, and relatives. Most of these emerging elite, urban businesspeople and politicians were part of the Darood clan in southern Somalia; all of them fueled by the wealth of foreign nations, and personally connected to the Somali government. Thus emerged class based inequality in Somalia in addition to the existing racial and ancestral hierarchies born from the trade of enslaved people and immigration. Subsequently, Bantu people found themselves at the very bottom of this hierarchy, as agricultural workers, and as formerly enslaved people and either non members, or unrecognized members of the Darood clan (Besteman, 2016).

While the governmental level experienced a dramatic increase in wealth and resources, villages like those in the Jubba and Shebelle river valleys were not invested in. Despite a desperate need for roads, schools, and medical facilities, these areas of Somalia saw only the development of foreign capitalist ventures, including a plan by the World Bank to build Africa’s second largest dam, and a USAID plan to privatize all land ownership, that ultimately ended up in the hands of elite, Mogadishu politicians and businesspeople (Besteman, 2016).

After the fall of the Berlin Wall and the collapse of communism, the United States determined that Barre was disposable as an ally, and promptly cut aid to Somalia. In that same year, Barre’s government was disenfranchised by separate anti-government coalitions that banded together and militarized to force him feeling for Kenya in 1991 (Besteman, 2016).

Bantu people in the Jubba and Shebelle valleys undeniably suffered under Barre. However, when he passed by these valleys on his way to Kenya, his militia distributed weapons and vehicles to his supporters in the Darood clan to suppress Barre’s opponents, Bantu people were brutally murdered, raped, and dehumanized by the newly empowered pastoralists (Besteman, 2016). In response, Bantu people were forced to flee their pillaged homes in the middle of the night, as to not encounter Darood militia who aimed to keep them within the valley (Besteman, 2016). Most people, who were able, headed 40 miles to the border of Kenya, many to a refugee camps in Dadaab, in the north-east, and Kakuma, in the north-west (Crisp, 2000; Eno & Van Lehman, 2003). Our founder and executive director, Muhidin Libah, grew up in one of these Kenyan refugee camps before moving to the United States and enrolling in college in New York.

Many people died of diarrhea and starvation during the trek, and many more died of other curable diseases once arriving to Kenyan refugee camps (Besteman, 2016). Even in these camps, Bantu people were subject to discrimination and often placed in housing units on the outskirts of the camp, where residents were more vulnerable to looters and women more vulnerable to sexual abuse than their Somali national counterparts in the center housing units (Eno & Van Lehman, 2003). Bantu families were often made to work for more powerful Somali families within these camps, building homes, and fetching water and firewood (Horst, 2007).

Further, these refugee camps were particularly controlling, dehumanizing places for all residents. Many published reports of these camps concluded that, in the face of inadequate checks of power, agency staff considered refugees to be untrustworthy subjects, and would often withhold food, compensation for work, and other basic needs as a means of control (Agier, 2002; Crisp, 2000; Harrell-Bond, 2002; Horst, 2007).

Even in these camps, Bantu people were subject to discrimination and often placed in housing units on the outskirts of the camp, where residents were more vulnerable to looters and women more vulnerable to sexual abuse than their Somali national counterparts in the center housing units (Eno & Van Lehman, 2003). Bantu families were often made to work for more powerful Somali families within these camps, building homes, and fetching water and firewood (Horst, 2007). 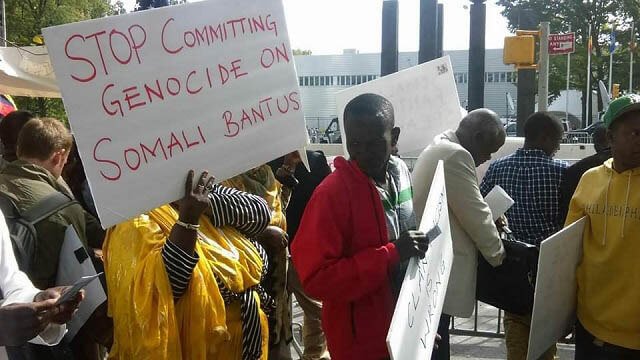 In the last years of the 1990’s however, some Somali Bantu people were identified by the UNHCR as resettlement priorities given that they were an “extremely vulnerable group” that “could not be returned to their home country.” In 1999, the United States offered Bantu people P2 resettlement status, meaning that they were at particular humanitarian risk. However, multiple years would go by before anyone could come to the United States through this program due to processing and protocol (Besteman, 2016).

In the mid 2000’s, Bantus were finally able to begin moving to cities across the U.S. About 12,000 Somali Bantu people are now living in the United States, and in 2005, Somali Bantu people began to arrive in Lewiston following a large secondary resettlement of ethnic Somalis. Today, there are over 7,000 Somalis in the twin cities of Lewiston and Auburn, over 3,000 of which are Somali Bantu (Besteman, 2016). Now that Lewiston is home for our community, we are working hard to contribute to our city’s social and economic vibrancy.

For many decades Lewiston has been suffering a decline in the manufacturing industries that had once been its economic base (Besteman, 2016). Although this trend bottomed out in the 1980s, the most recent U.S. Census still reported harrowing results. Over 23% of people in Lewiston are living at or below the federal poverty level. Downtown Lewiston is home to three census tracts among the poorest in the nation. The poverty level in these “extreme poverty tracts” reaches as high as 67%. In 2017, for example, 96% of children in the city’s school system were eligible for free/reduced meals (U.S. Census Bureau, 2017).

USDA defines food security as “access, at all times, to enough food for an active, healthy life for all household members.” In the most recent update of Household Food Security in the US, Maine ranked third in the nation for people experiencing very low food security (Coleman-Jensen, Rabbit, Gregory, Singh, 2016). In this context, the Somali Bantu are the poorest community in the poorest city in one of the poorest states. 5 years ago, our organization was born to combat this trend and encourage our community’s self-sufficiency in the face of these disadvantages.

To learn more, we highly recommend the book “Making Refuge: Somali Bantu Refugees and Lewiston, Maine” by Catherine Besteman and this website sponsored by Colby College.